Definition for morning play:  Open Play for Experienced Players: intended for the players that have an understanding of the game and how it is played — a more competitive environment but not suggested for beginning players.

Definition for evening play:  Open Play for Social Players: intended for all player levels wanting to have a fun, social and recreational experience.

1.  Good sportsmanship is the rule. Yes, you love the game, but it is only a game.  Respect all players.

2.  Begin each game by acknowledging the other players, and introducing yourself if you don’t know them. If you do know them, use whatever is appropriate to let them know that you know they are there and are saying “hey.”

3  If the ball is “out,” and it’s on your side, call it out. If it’s close, give the benefit of the doubt to your opponent. This is hard to do when the game is close but do it anyway.

4.  If you step into the kitchen on a volley, or if your partner does, call it. Be very cautious about calling kitchen or serving faults on others. (Most of us are at an age where our vision is questionable.)

5.  Sometimes spectators comment on the plays.  While this is normal and fun, ask them not to if their comments are loud, disruptive, argumentative, hostile or combative.

6.  The following is not something that needs to be enforced, but it falls under the realm of basic pickleball etiquette:
7.  If you agree to helping improve less experienced players with a game or two, here are some tips: 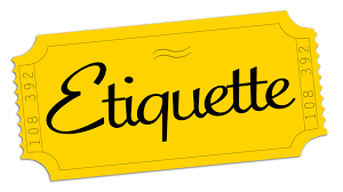 3.  If there are paddles in the paddle holder, players who just finished their game must exit the court so that the waiting players can come onto to your vacated court.  We must insist on this and appreciate your cooperation.

4.  If there is a paddle or more up in the paddle holder, even though there are empty courts, teams that just finished playing should allow the waiting player(s) to mix in.

6.  If you are crossing an active court to get onto a vacant court or to leave a court, wait until their current point is over. Ask them for permission to cross their court. (Make sure you go on the courts when you have all 4 players together, then move to your court quickly.)

7.  At the conclusion of your game, pick up your ball and place it back in the ball holder before exiting the court.
Please put your name on your paddle for a couple of reasons:  First of all, inevitably we may leave our paddle around and walk away forgetting it.  At least someone can identify the paddle and contact you to let you know he has it.  But another good reason is when your paddle is in the holder and your turn to play is up, the others are not trying to find out whose paddle is whose resulting in a delay getting on court.

8.  While playing on the courts, play under control so that you are not running onto the other courts playing the ball.  Stop! You don’t want to run into the players on the other court. Control is needed also when trying to return a ball near the fence.  Please don’t use the fence to help stop your momentum — it is damaging to the fencing.

9.  Want to practice by yourself?  There are two backboards that can be used, one at each complex.  The backboard at Wagner is on Court 5.  The backboard at Sage is actually on the tennis courts; however, don’t use it when the tennis players are using the two courts that back it up.  You can also practice hitting your serve when a court isn't in play.  Grab a couple of balls not in use and hit into the corner.  Collect your balls from that corner, then hit back into the other corner.  Be considerate of others if the other courts are in use, as your serves may roll around the court.
​
10.  NEVER yell at, swear at, or say a hostile or sarcastic word to any player in anger. Abusive language will not be tolerated on or around the courts.

Remember, during the open play session we are trying to get members to mix up so that the various level of players can mix in and hopefully get a better understanding of what it takes to move up in skill level.  All players like to improve.  It bears repeating — the better, more experienced players should occasionally make themselves available to play with or against the less experienced players.  Remember, we are all in the same club.

[If you are wanting to bring a foursome up to play, it would be best to reserve a court for the four of you in the afternoon time slot.  I understand some times the morning is the only time you may be able to play but try to comply with the spirit of what the open play is about.]

1.  If you are near your partner with an overhead slam opportunity where you may hit them, stop play. Let the ball drop. Lose the point. Do NOT hit your partner. Stay conscious of where they are.​
​
2.  If you hit a ball into another court, immediately yell “Ball On Court!”  If a ball is going towards another court, do not chase it onto the other court.  Stop, yell “Ball on Court”, and let the other people stop play and retrieve the ball.  No point is worth tripping over a ball and hurting yourself or other players.​

3.  Don’t overplay your current physical condition. (“Just one more game” has caused way too many accidents!)

4.  Hydrate. This means “drink water.”  Drink BEFORE you are thirsty, otherwise dehydration starts to set in.

5.  Stretch before and after playing. We know … we all say we do it, but do you?

​6.  If you see someone who displays signs of dizziness, weakness, or lack of concentration, keep an eye on them. Recommend a time-out if you think it necessary for their sake.