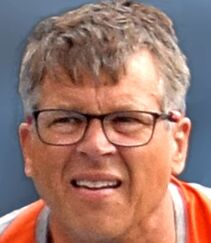 Happy Spring to all our pickleballers.


Thank goodness Sun City Festival shut down our courts! With all that
extra time, I was able to compose my “End of the Season” letter from
the president.

A lot of wonderful things have happened this year. Thought I should fill
you in on a few.

For some reason the ball no longer skips off the lines at Wagner courts.
Hard for me to remember how irritating that was until I go to Sun City
Grand and play. A huge thank you goes out to all un-named helpers.  If
that alone was all we accomplished it would have been a fantastic year!

New larger gravel will be spread around the courts at Wagner this week.
No more pea gravel all over the courts! Thanks to all those who voted
yes on this project. Don’t forget to give Tom Karas a big hug (after the
risk of spreading the virus is over) for his negotiations with Pulte to make
this wonderful project happen. It would never have happened without
him.

We purchased a new Lobster pickleball machine this year. We moved the
old machine to the Sage courts. We now have a ball machine at both
court locations for the first time. Bill Fisher (I have already hugged him)
was in charge of this project. Thanks to Brock (more hugs) for designing
a reservation program so we can reserve the Lobster on-line.

We also purchased two new laptop computers for the in-house
tournament. If we would have gotten to play things would have gone
very smoothly. A big thank you (and hugs) go to Katie Fender for
volunteering at our annual meeting, to run the in-house tournament.
The amazing John Woollums was ready to pass the torch and Katie saved
the day.

We have continued the player development modules that (I hope you
have hugged him by now) Ernie Jerome engineered. A brand new weekly
beginner class has been added to the schedule for players new to the
game. We had over 100 participants in that class this year. Ila Haas has
volunteered to fill our board position for player development. You rock
Ila!

We had a volunteer celebration planned this Spring. It was the least we
could do for all the wonderful folks who have given their time to make
our club better. Don’t worry keep volunteering as we will have another
celebration next year. I can not emphasize how important all the
volunteers are to our club. If you have been reading this email you can
see what happens when people volunteer. If you have not volunteered,
don’t worry. There are plenty of opportunities.

In fact, we have added a volunteer coordinator position for next year.
This will not be a board position but would definitely streamline our
​organization.  More information about this role will be coming out shortly.


We enjoyed a very successful Dink-a-thon this year. Some new rule
changes were made to help us improve our level of play. I will try and
give more clinics next year on the Ernie and “around the post” shots.

We also planned a new tournament in conjunction with the Fire
Department. A nice way to raise charity funds for the Firefighters.

I could go on and on. I am so proud of the board members: Tom Karas,
Lynne Owen, Darrel Spiczka, and Ila Haas. It is hard to laud them without
including Brock Taylor and Katie Westermann our two computer and
email blast folks. This group of people care so much about our pickleball
club! Please remember to smile when you see them. There is no better
response you can give a volunteer.

Keep smiling on the courts.